Located in Western Washington, the Chehalis River Basin map is the second largest watershed in the state. It covers Water Resource Inventory Areas 22 and 23. Within the 2,600 square miles that make up the Chehalis Basin, there are over 3,300 miles of rivers and streams. The Chehalis River starts in the Willapa Hills region near the town of Pe Ell and flows downstream through a variety of diverse eco-regions. It is bound on the west by the Pacific Ocean, on the east by the Deschutes River Basin, on the north by the Olympic Mountains, and on the south by the Willapa Hills and Cowlitz River Basin. Elevations vary from sea level at Grays Harbor to 5,054 feet in the Olympic National Forest.

AN INTERACTIVE MAP OF THE CHEHALIS WATERSHED CAN BE FOUND HERE.

The Chehalis Basin has over 140,000 residents that are spread throughout seven counties (Thurston, Lewis, Pacific, Cowlitz, Mason, Jefferson, Grays Harbor, and Wahkiakum) and one tribal reservation (The Confederated Tribes of the Chehalis Reservation). Residents in this region use the waters of the Chehalis River and its tributaries for a variety of purposes including: drinking, irrigation, industry, navigation, and recreation.

Throughout the Chehalis Basin forestlands dominate the landscape. Agricultural and urban areas are also common throughout the lowland regions of the Basin. Waters of the Chehalis River Basin and Grays Harbor Estuary support a variety of fish and wildlife species, including eight that are currently listed as Threatened or Endangered under the Federal Endangered Species Act.

The Chehalis River system flows through three distinct eco-regions; Cascade (including the Olympic Mountains), Puget Lowland, and Coast Range before emptying into Grays Harbor near Aberdeen.

The mainstem and South Fork Chehalis drain areas west and south of the City of Chehalis. Two major tributaries in mid-basin, the Newaukum and Skookumchuck Rivers, have their headwaters in the foothills of the Cascade Range. Another mid-basin tributary, the Black River, originates in Black Lake. For details on the streams and rivers in the Chehalis Watershed, see this document on “WRIA 22 and 23, Chehalis Basin.”

What is a watershed?

A Watershed is an area of land that contains a common set of streams and rivers that all drain into a single larger water body, such as the Chehalis River or Grays Harbor.” 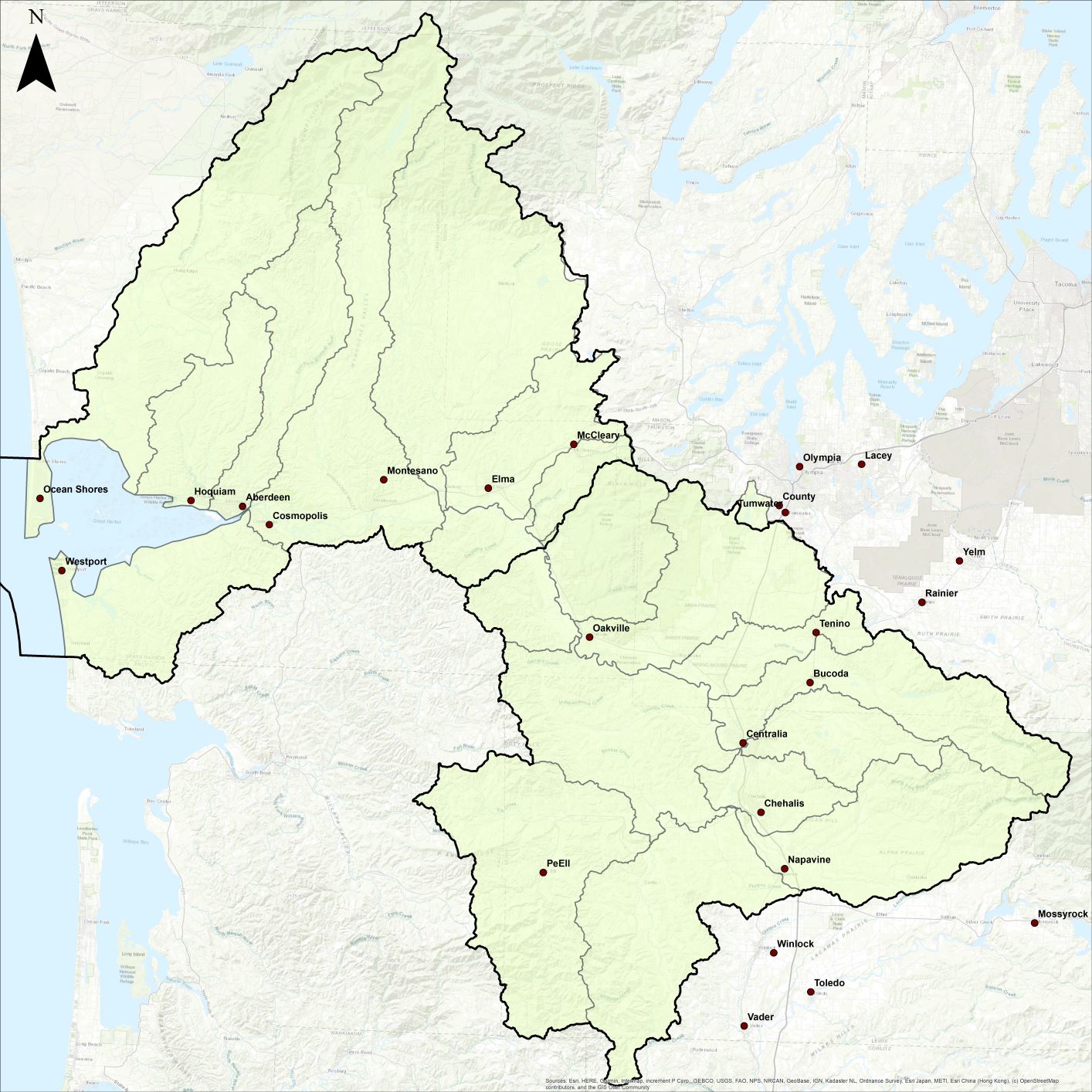